You are here: Home / Cat Care / Is Your Cat Having an Affair?

My cat Ringo or Mr Ringo to his friends loves visiting my neighbour who lives next door.  He used to visit my next door neighbours in our previous house, he’s just really nosey and an opportunist, looking for more treats etc. He doesn’t need a cat flap, Ringo just uses the often open back door. It used to really upset me and I often got annoyed, I felt like he was betraying my love. How dare he want to go there when we gave him a wonderful home with the best cat food! I felt like Ringo was having an affair! Silly I know….

As time has gone on, I’m more at peace with his wanderings to see the neighbours, better to live next door to cat lovers than haters surely? Cats are independent and unless we keep them indoors, they go and do what they wish.  It also makes me smile when my poor neighbour loses a tuna steak from her kitchen top…. ummmm wonder who stole that?? However I wasn’t smiling when I saw my neighbours leave for a weeks holiday only to later see Ringo in their house looking out of the window! Don’t worry we got him out

My neighbours are often on hand to cat sit for Ringo when we aren’t there and he even has his own towel to dry him when it rains! I used to want to tell my neighbours to get their own cat, but then if they did Mr Ringo would fight the poor thing…..

Maybe Ringo just likes a bit of a change sometimes and the neighbours offer him a change of scene or different type of service of B&B?

Mr Ringo has even been in a house further down the road that I happened to be cat sitting for, I went into the house to find him sat on the bed! I’m not sure who was more surprised! The resident cat wasn’t bothered, maybe they were friends?

I’m often told by my clients that non resident cats visit their houses and many of them appear to be ginger and nearly always male funny that I hope they aren’t all Mr Ringo!

This book has something for everyone whether you are … END_OF_DOCUMENT_TOKEN_TO_BE_REPLACED

Mr Ringo is 18 years young and according to … END_OF_DOCUMENT_TOKEN_TO_BE_REPLACED 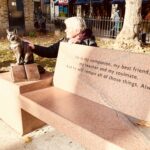 Being a great fan of Bob the Street Cat, it was lovely … END_OF_DOCUMENT_TOKEN_TO_BE_REPLACED