You are here: Home / Archives for Dickin Medal

I loved this book and especially enjoyed the true story told from a feline point of view. I never knew the story of HMS Amethyst until I read this

What a wonderful connection this cat had with his human companions after they rescued him as a stray in Hong Kong. How useful he was to them, not just by providing company but by catching vermin on ship and wow he caught some big rats!

Simon was awarded a Dickin medal, the only one given to a cat for his bravery and valued companionship he gave his fellow sailors. He is buried in the PDSA’s pet cemetery in Ilford and was laid to rest with full Naval Honours.

Simon was a brave loyal cat who deserved his medals and place in feline history.  The ending of this book although bittersweet was so beautifully written.  Such a shame the Royal Navy stopped allowing ships cats in the 1970’s

This book is available from all the usual online book retailers. 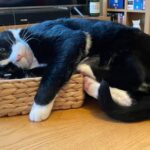 Catnip is a plant that cats are attracted to whether … END_OF_DOCUMENT_TOKEN_TO_BE_REPLACED 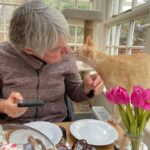 After waiting many months during lockdown, I finally … END_OF_DOCUMENT_TOKEN_TO_BE_REPLACED

One of my regular cat sits, multi cat household th

Mr Ringo says hello to everyone! He’s been a lit

Pretty Penny used to hide and I could never find h